My name is Amelia and I wished to tell you about my first piloting experiences. My father is an enthusiast since his early childhood and a pilot for more than 10 years. My first name was even inspired by that of the Amelia Earhart, the famous American aviatrice who helped openaviation to women by her incredible flights. With all this, necessarily, I fell in the aviation pot quite small as a certain french comic strip character. 3 months ago I asked my father at which age I would be allowed to begin to pilot because I more and more had a desire to fly. He said to me that I was still a little bit young because I could not take the necessary eams at my age. Indeed, 11 years is a little bit young. But I want it all the same, so I asked the questions several times. Hoping the answer would change ! Who knows ! It doesn’t hurt to try ! 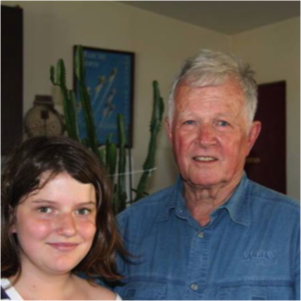 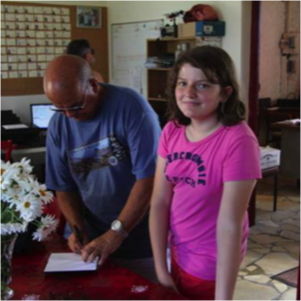 A few days ago, my father told me he was going down in the Médoc to fly with a club that I likes there, the Aéro Club du Médoc. He suggested I come with him. We took off from Pontoise, near Paris, to go to Lesparre Saint Laurent Médoc. We did do a short stop over at Cholet to have lunch. The day after our arrival he had an apointment with the instructor of the club so he could be chcked out on the Robin DR400, but he had a surprise in store for me. He had organized my first flying lesson with an instructor. My first flight without him. I was a nervous, and had a little fear, but I was very happy also. He chose to have me start on a microlight with an instructor he admires a lot. He dreams of having only half of the experience ! Roger Ricard has flown on more than 135 types of planes and has several thousands of hours of flying. A fabulous instructor ! With Roger, we went to check out the G1 on which I was going to fly. It is a very beautiful blue and yellow aircraft with a dragon on the tail. Having verified the plane we started at once. Roger even let me take-off (with helpI must admit) , we started at once with basic plane handling. The first take-off was very exciting. While doing this basic handling, I learned that I flew with the stick but that the feet were important also. Later, I even told my father that he did not use enough feet on his Cessna! On the small Microlight we feel everything at once and the slightest movement on the commands moves the plane, it is impressive but with Roger I was reassured. Too soon, wewere coming back to land. Roger took care of that, I am still not ready for that. Having tidied up G1, we discussed the flight to continue to learn, but for me everything was magic.

And the magic did not stop there. A little later, Mister Jean-Loup Chrétien, the first French astronaut, coming by the airfield, agreed to sign my logbook and be my flying godfather. How lucky I was! The next day, the second lesson was just as magic and I began to understand more things. It is not easy sometimes but Roger explains well. We even did a stall. But one flying godfather is not enough, on returning from this second flight it is the second godfather who was waiting for me. It was Mister Patrick Baudry, the second French astronaut, who, very nicely, agreed too to sign my logbook also. Now, on my logbook I have a small comment from two astronauts and a fabulous instructor. I do not know about a pilot so fortunate as me and even my father is jealous. The comments they wrote I’ll keep to myself because I’m too proud of them ! I can’t wait for my next flight !