Pulse of Europe - our hope 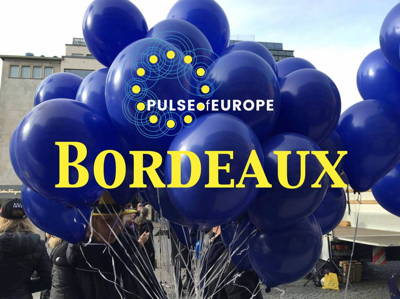 It was when a friend flew a European flag outside his bungalow at Euronat, that we first understood his enthusiasm for the group « Pulse of Europe » The work of this group had been growing for some time but, at the time of our arrival, had not yet reached the Medoc.It is an initiative which aims to unite Europeans of all ages and classes, encouraging them to work for the future of a united Europe within their own countries.

On 9th April 2017 in Goethe Platz in Frankfurt-am-Main, we also felt this enthusiasm as we saw a tide of European and French flags during a demonstration concerning the forthcoming French election. During the speeches, we heard accounts of Franco-German relationships, including a couple who particularly touched us, telling two stories of members of their families, the generation that experienced the war. Unfortunately we only had our old laptops with us, so the quality of the sound and the picture is not very good. But we can still remember the reason for our enthusiasm.

A short Google search showed that there was a similar demonstration by Pulse of Europe in Bordeaux. Has the Pulse finally arrived in the Medoc? There are certainly many Europeans who live here. We will be arranging another European picnic in 2017.