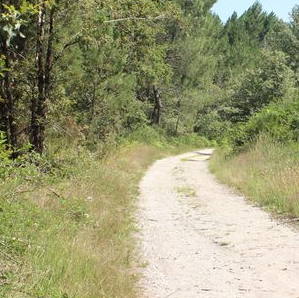 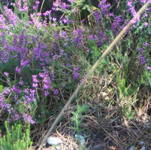 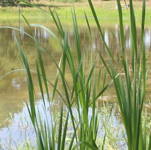 Last Sunday, I signed up with Oscar the dog for a group walk in the forest, not far from home.

We met up in a small carpark next to a little lake. The other dogs, accompanied by their masters and mistresses, were already there. And we set off on the forest path.

It was 11 o’clock and we were leaving for 2 hours of ….. forest bathing. There were pine trees, oaks and giant ferns.

Here and there a clump of heather struck a bright note.

I was annoyed that I hadn’t brought my camera but then, holding an unchained fox on a lead is hardly compatible with amateur photography.

The walk was both pleasant and invigorating. As we came out of the forest right by the lake we were rewarded with a stunning view. The lake is a rare pearl in its setting among the pines.

Seen like this it’s already charming but …. then it becomes magical: a big carpet of pink water-lilies spread out in the sunshine.

I set off to walk round it. From whatever angle I look, it enchants me.

Including the spot, which will go down in history, where Oscar stopped, sat down in the water and meditated for a minute ……

That’s why, seduced by the lake, I returned several hours later, equipped with my camera.

Lake of the sands 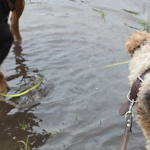 The forest of the Médoc jealously hides its secret lakes and you end up discovering them by chance, after you have followed the twists and turns of paths where this summer’s last rainwater lies languidly capturing the sky and the trees ….. and us as well!

It was during this second dog walk that we discovered this lake without a name, which I’ve decided to call: the lake of the sands. This lake really has many features, the first of which is that it looked to us like a big hole dug into the sand.

We soon noticed that although these different features were interconnected each did not display the same face. But each had a wild and romantic charm with a touch of mystery which held me back, despite Oscar, immune to the poetry, tugging on his lead to get back with the other dogs, and in particular to a black bitch with whom he had clearly fallen in love even to the extent of getting his feet wet, which he really doesn’t like.

This lake of sands changes its character, just now edged with a beach for me to sunbathe, listening as the silence is on occasion broken by the crack of a pine disturbed by the heat …… but that was a while ago during the heat of summer.

All of a sudden it can seem grim, almost threatening, as if it’s hiding a water monster waiting to gobble up anyone foolish enough to bathe in it.

But there we go, we take a route that seems to take us away from the lake!

Good idea, come on Oscar, a bit of exercise!