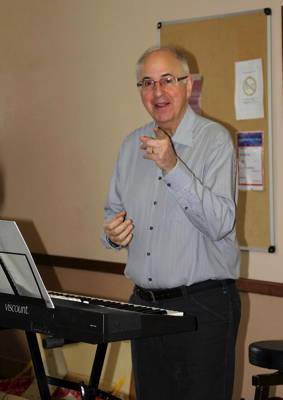 At the start of the 1976/77 school year René Rey, then Director of the school at Moulis, founded the Moulis Chorale together with 15 amateur singers. This would become, a little later, the Ariana-Médoc Vocal Ensemble. Only 4-5 of the members from this time still sing in the choir.

During its first 10-12 years the group grew until it eventually reached an effective strength of 25-30 members from Moulis and the surrounding areas. During these first ten years the repertoire comprised mainly various Renaissance songs, negro spirituals, miscellanies, etc. Gradually René started to include small pieces of classical music, both secular and religious. We then started on Mozart, Vivaldi, etc.

At the end of the 1980s René was invited to take part in a musical project with several schools in the area: The Castle of Delights. There he met a family of lyric artists from St. Laurent: Mr André Dran and his companion Michèle Pena. As a result of this meeting he decided to take a major step forward for the choir by organising a first concert with orchestra and soloists.

In the meantime René had become Professor of Music at the University Institute for the Education of Masters, and moved to the Dordogne. He then arranged to come back every 2 weeks. He prepared separate recordings for each voice to enable us to work individually. Arriving at La Force, where he was born, he created the Sarabande Vocal Ensemble with whom we would sing together from that time onward. We have now been working together for nearly 20 years, with 3-4 concerts in each department every year.

The membership of Arian-Médoc has continued to grow and now exceeds 50 choristers from the whole of the Médoc, between Bordeaux and Soulac.

Passionate, an excellent teacher, and endowed with a great musical sensitivity, René has always made himself readily available and shown great patience. With considerable mastery he has shared his love of music with all the members of the choir, who reciprocate with their loyal friendship. It is obvious that his talent and gentleness are the key to our longevity and to the friendly ambience within our group. He is also very much appreciated by the soloists and musicians who accompany us.

2015 the board of management, translation: Margaret and Richard Beasley