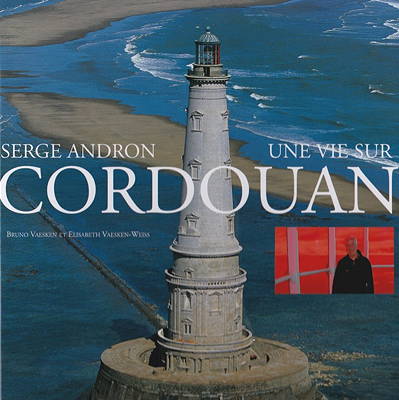 The lighthouse keepers’s job is just like any other job really, except that you are isolated, either in the open sea or on an island. But, as public employees, we have the option of changing our position, we are not martyrs to society. If you don’t like where you are, you just have to stay there for 3 years, and then you can apply for a transfer.

As it turned out I only had one change: once I found myself at Cordouan everything was to my liking. My first trip to the lighthouse was by helicopter – my lighthouse baptism …….. one day I was able to go right around the lighthouse in a ULM and it’s truly impressive to see the lighthouse from above ….. while when we are down below we see just the bad weather and the crashing swell. So I stayed there until 2012 and then retired.

On the lighthouse there was a good atmosphere among the keepers, and that’s so important. I worked for 15 years with a colleague who was originally from Belle-Île in Brittany and who went back there when a vacancy arose as he couldn’t miss out on the opportunity. He was a good colleague, just like a brother. You know, there are times, when you go out fishing, you don’t need to talk to understand one another. We both came from the coast, we both started off by training as carpenters ….. at work there were so many things we had to do together, we understood each other, we were on the same wavelength. And then, life separated us.

In the old days the lighthouse had a kitchen with an oven. Cordouan was the only lighthouse in existence with a bread oven, because the keepers used to follow a rota of 45 days on the lighthouse then 15 days off. I never had to do that, even though 15 days on the lighthouse and a week off, as in my time, was already quite a grind. There was no phone, the bathroom was very basic, just a basin. Still that was when I was young and it didn’t bother me much.

For the change-over we made use of a launch belonging to the Lighthouse & Beacons Service, like the one in front of our museum at the Grave lighthouse. I borrowed it at times to refill the buoys when they were lit by gas. It was nicknamed “the widow-making machine” because it sometimes exploded …. You refilled the gas with a simple motor pump, and sometimes there were leaks. When one boat of the Lighthouse & Beacons Service exploded the sailors only just had time to leap into the sea before the explosion. Afterwards, things got better.

The boat was also used for lifesaving duties as it was built for the high seas, and at times in the past the subdivision used it when the usual lifeboat wasn’t available.

On the buoys there were sound signals as well as light signals. In certain places there were buoys with bells on which gave fishermen an indication of the strength of the swell of the sea: for example, if they rang once and then rang again a short time after … and if they rang very quickly, that meant a short swell. I personally never really knew this system … except when I was with my uncle in the Vendée. It was also common in Brittany and other regions. The buoys were positioned at very precise locations Sometimes a whistle was used instead of a bell, in the same place on top of the body of the buoy, and air was stored in the tail of the buoy and the tube, here, and each time the buoy rose no sound came out but when the buoy dropped down again, because of the action of the wave, well …. it whistled, and that gave sailors an indication of the length of the swell.

Previously, as far as the light itself was concerned, they used to have much more work than we did as they had to reset the fuel level and the air pressure level so that everything was ready; they had to clean the burner by steeping it in fuel and then they had to test it to make sure it worked properly. All that could only take place during the day: in the morning the bits were still too hot. Then afterwards they had to put it all together again. When the lighting became electrified there was certainly less to do, except for the number one lamp, and this had to be set twice a day without fail, evening and morning. But that wasn’t hard work. At any rate, when it was switched off in the morning, we had to put a cover over the optics and close the curtains on the side facing the setting sun for the very good reason that the sun is very strong at its zenith, and that was like placing a magnifying glass on the optics, which would cause the lamps to burst. With the new generation of lamps, all this was rendered unnecessary. We carried out maintenance work, repairs to the generator, anything which was liable to break down. There were lots of things to do, things which we did ourselves and which the present keepers are no longer allowed to do. Also they are not allowed to do everything that’s needed on the lighthouse, whereas we maintained everything inside the lighthouse, and there was a lot to do at Cordouan.

At the moment the keepers have access to all parts of the lighthouse, except for the lamp which is inaccessible. Repair work is undertaken by the Lighthouse & Beacons Service. Moreover the present keepers don’t have special training in either electronics or mechanics.