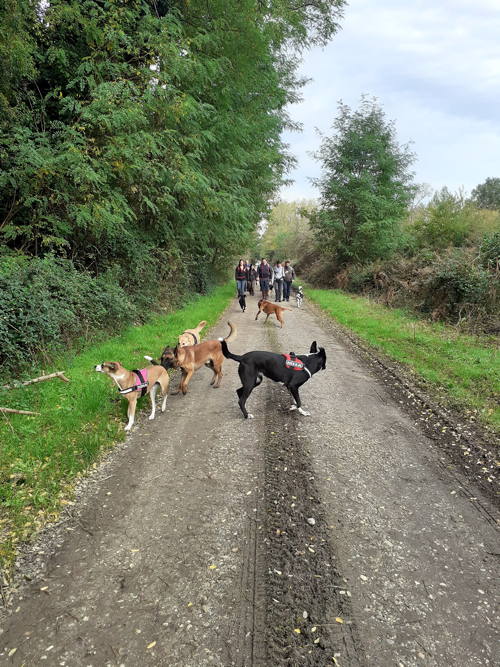 "Bang!" ... "Bang!" ringing out everywhere. Despite the frightening sounds of the hunting season, the group of 13 cars (I counted them) find their places in a parking lot at the edge of the forest of Bernon, near Saint Laurent-Médoc. Today is Canimarche with 17 dogs.

Large, medium-sized, young, old, educated and non-educated dogs jump out of the cars. Tightened to their leashes, they sniff, growl, and bark at each other to show off or express their fear. They want to go, run, race and play. Fabrice, the director of our dog club, raises his arm: "Ils battent!" "Ils battent? Ils se battent? " I am asking. My imagination immediately tells me stories of running men in the middle of the woods, raising their fists and beating each other. "Ils battent?" I ask the young woman with the German shepherd mix, who has parked next to me. "C'est la chasse, ils chassent!" "Ah, I see!" The dogs jump back into the cars, and we continue to the next parking lot in the forest.

Today, as on many Sundays of the year, we meet somewhere around St. Laurent-Médoc for a two-hours Canimarche, a dog-with-owner-walk. We are all members of the Dog Club "Education Canine Julienois". It is an opportunity for the dogs and us, their owners, to socialise and walk through beautiful nature at the same time. I always learn more about dogs during the walks. Marine tells me to not only say “non”, but “non, pas toucher!” when Barney wants to eat something unwanted by me. Without leash, our four-legged friends chase through the foliage, jump into the wet trenches, race each other, sniff and lick, and sometimes they also fight. My little dog, a Podenko-mix from Portugal, usually stays close to me because he cannot withstand the force of the bigger dogs; he is often overrun and screams out loud when he is. On these walks he is the smallest; his trump is the speed. His mother was a whippet and so he shows all the other dogs a long nose, when they want to capture him.

We move to another place, and dogs and owners get out of their cars. The shooting sounds less threatening from a distance. After a few steps, we detach our dogs from the leashes, and off they go, chasing into the forest. We, the people, deepen our conversation about dogs and God and the world. "Oscar - here! By foot!" Screams the young man, "Oscar !! I say 'here'!" But Oscar is already deep in the forest. "OOOSSSCCARR!" Finally, Oscar returns to his master together with four other dogs who have joined him. "Oscar, I told you, ‘here! '." The "Bang! Bang!" is getting louder again. Suddenly, a pack of hunting dogs appears in the middle of our path, trying to push back the unwanted pack of barking dog's. "Woof! Woof!" Our dogs strike back confidently. Two packs insisting that the territory belongs to them. A whistle sound calls the hunting dogs back to their masters, and we continue our walk. But where is Barney? I was so busy chasing the hounds that I lost sight of my little Podenko. "Barney!" My shouting gets hysterical: "BARNEY !!" Did he escape with the hunting dogs? He differs in size only slightly from the rabbits that the men are hunting. And again, more desperately now,

I scream: "Barney!" "He'll be back," the nice woman with the 11-year-old Labrador assures me. "But where is he?" He does not know this forest. Oh God, what should I do? I'll stay exactly where I last saw him. Some are waiting with me. Solidarity is important in the club. "Barney!" I whistle. Was he accidentally shot?

There, something rustles in the undergrowth. A white creature stands out against the brown and yellow leaves. Tail wagging, little Barney runs towards me as if nothing had happened. My darling is back, "oh my dear Barney, my Barney!" I pet him softly, and put him on leash, as a precaution. "Leashes!" Fabrice screams "Dogs on leash! - Hunters! " Good that Barney is already leashed. "We turn back," Fabrice decides. "Next time we walk on the beach." "Barney hop!" My darling jumps into the car, lies down on his blanket in the back seat, relaxes and falls asleep. And I head back to Soulac, after an exciting and beautiful Canimarche.