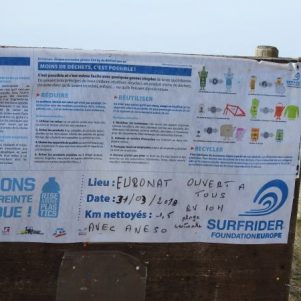 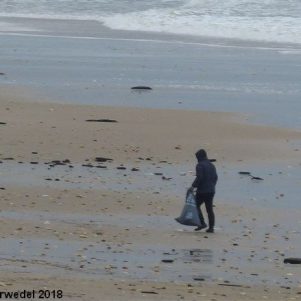 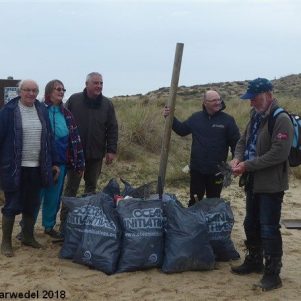 At the end of March, an invitation appeared on the notice board on the main beach of Euronat to clean the beach on March 31, 2018, meeting at 10am. This was postponed due to bad weather on March 31 and was carried out on April 7th despite the persistent bad weather.

A scant dozen French people, with the odd German, searched the 1.5 km from the beach of Euronat for about two hours and collected all the rubbish in trash bags.

In truth, it’s a rather miserable job, demanding a group on pensioners to bend repeatedly to pick up pretty distasteful stuff. However it became clear that there is strength in togetherness, because the common goal kept everyone going and, in the end, we achieved our goal. One of the group who has been collecting rubbish on the beach for many years, has noticed that every year the things you have to pick up get a few inches lower.

We all agreed that this was true. It would be nice if younger beach lovers also got involved in the next clean-up campaign, and representatives of all nationalities.