Bertrand Jung studied agriculture and aquaculture. During a training visit to Le Verdon, he discovered how good oysters and prawns were in the Médoc and he stayed here!

We took a tour with Bertrand Jung, which he ran for a French group. First, he explained the environmental conditions for his breeding which he has been working on since 1989: the water in the breeding pool is a mixture of fresh water from the Gironde and salt water from the sea. A sluice system ensures that the mixture remains largely constant and always receives enough food from the sea into the lagoons which measure about 100 by 50 meters and about 80 cm deep. The young animals are bought Mr. Jung, the prawns from a rearing institute, the oysters from the Arcachon Basin. The conditions in the lagoons are ideal, because new food enters all the time. The oysters are bred in wire baskets, which are fixed below the water line so that the oysters are not disturbed by being exposed above water. 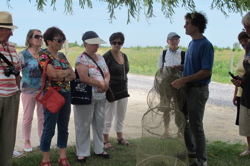 The prawns are a Japanese variety, which are active in the night and dig into the sludge layer at the bottom of the pools during the day to protect themselves from predators, leaving their shelter at night to seek food. While the oysters are harvested from the baskets, the prawns must be fished at night. To do this, the fish are caught from one side of the pond the prawns are caught from the other side.

At the Aquacolefarm at the port of Saint-Vivien you can buy not only the prawns and the oysters, but also a great variety of shellfish and shrimp. There and at the local market, Bertrand Jung sells mussels, prawns, oysters and prawns. In Le Verdon, he is the President of the Curuma Association, which is responsible for the conservation and maintenance of wetlands and their biodiversity.