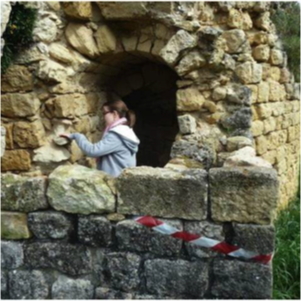 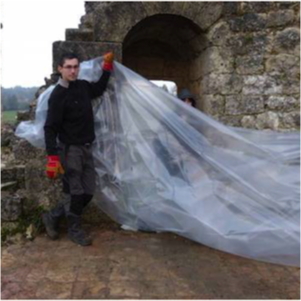 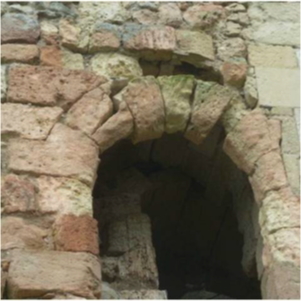 In the Medoc region there are many local associations dealing with heritage – most of them in rather isolated locations. The aim of the various Associations is to safeguard churches and other historic monuments, industrial heritage, fortresses etc...), they organize tours and create inventories of historic attractions. Those involved are volunteers who spend their free time to improve awareness of the region and to conserve its historical heritage.

In order to better coordinate these initiatives, to focus resources and find common goals - the Association, Amis des Patrimoines de Lacanau et du Pays Landescot, invited 7 other associations to a working meeting with a view to getting to know each other and each other’s problems. Marietta Dromain of the Association GAHBLE describes an example (the fortress of Blanquefort) of the difficulties the volunteers see themselves confronted:

The back-up team includes about fifteen to twenty volunteers of all ages, but primarily young people and students, who meet one Sunday a month to maintain the site by weeding of the towers and ramparts and taking out trees; all this is done manually, because the private site is home to a herd of beef cattle farmed organically. It is therefore strictly forbidden to use any chemical product, which would in any case damage the stones.

Another task is to make the fortress more accessible to the public. Thus, improvements are effected like a wooden staircase installed for better access to a magnificent room; piles of blocks have also been moved to leave more free space, fragile parts are protected by tarpaulins which are regularly renewed. Finally our aim is to extend awareness of the fortress, through guided tours and books written by volunteers and edited by the Association.

These two projects also have the advantage of enhancing student CVs, which is very useful when it comes to job hunting. Unfortunately, we are facing difficulties, some of which are insurmountable. The most unexpected concerns insurance, which considers that beyond 2 m high, we are no longer doing gardening but building works. It is difficult to remove fig trees, ivy and brambles on the 14 m high ramparts, which lack crenellation . In addition, there is a water infiltration problem, forcing us to a bale out the water from the room, with the consequent risk of stones and mortar crumbling and the ceiling collapsing. We should protect the upper room but are prohibited by the Regulations of Historic Monuments which also prevents us from replacing the fallen stones that we see regularly.

Money is another problem. In effect it is a private site and the owner, with whom we have signed an agreement, has left it to us to take care of the fortress, and he takes no part in this at all. So, when an arch threatened to collapse, it was impossible for us to pay the cost of the removal and rehabilitation of the vaults , which eventually collapsed, the DRAC promising to pay only a quarter of the price quoted, and that did not include the tariff of the architect for Historic Monuments.

We hope that after this first meeting there will be other opportunities for joint projects, which have need of mutual resources and support; all associations, which were presented at this meeting, have need of volunteers so that cultural heritage of the region can grow - a region sometimes accused of being a cultural desert. So let us all help improve the cultural quality of the Médoc!