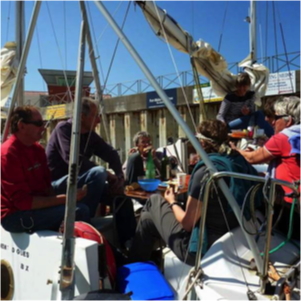 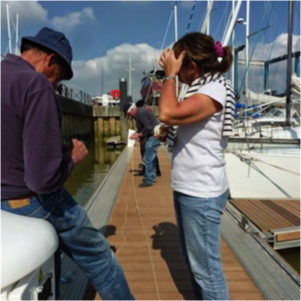 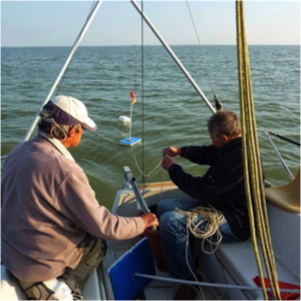 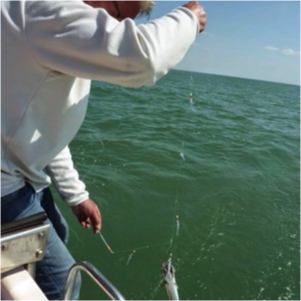 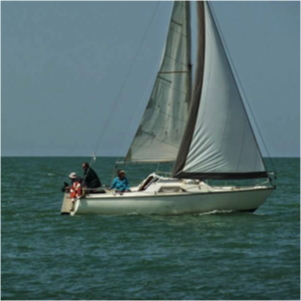 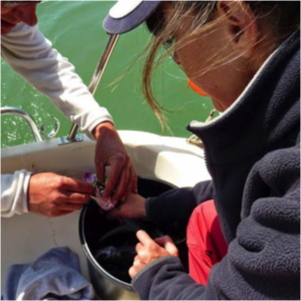 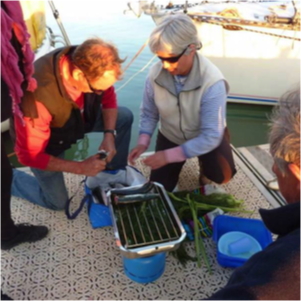 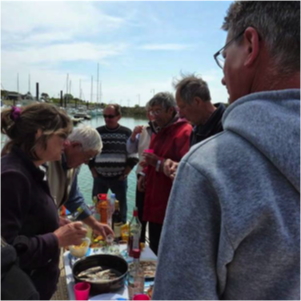 Friday: From the port of Pauillac in the quiet of the morning Weather: wind and sun. Ships laden with food, drinks, fishing rods and hooks. The wind helping with setting the sails: Heart of Grenadine (3 persons), Moby Dick" (2 persons) and West Wind (2 persons) for a mini regatta , keeping a contact on VHF channel 72 , to Port Médoc where we will join Jedak (5 persons) based in Port Bloc. Ca le Fait (3 crew) and Folie Douce (2 people / 3 dogs) will take the descending tide the next morning to go fishing off Bonne Anse near Royan.

Tacking constantly down the estuary channel we eventually arrived at Port Medoc around 2 pm and Jedak comes to lend a hand with preparing the fishing tackle: untangling 30 m of fishing line and attaching hooks at regular points, without getting it tangled, all as planned (by Captain Jacques)!

In the evening, West Wind has the task of setting out the line behind the cranes of Le Verdon: a particularly delicate operation! They must set out the fishing line with its thirty hooks attached without hurting themselves. After an hours wait either at anchor or sailing, the line is hauled in and... disappointment!: the baits are intact, the fish refused to play with us. However to a dramatic sunset, and a super aperitif concocted by Jocelyne us as consolation, taken on the pontoon by the 21 sailors who were warmed by the stories of their exploits. As there were too many to accommodate on one boat, each crew dined on board their own.

Saturday: Camille was integrated into the group before we all sailed out of Port Médoc – light wind and ebbing tide, in the direction of the southern pass for hours of fishing but with autonomous option for taking the Bonne Anse channel towards the end of the rising tide. Some hesitation in finding the channel entry point which is marked by two buoys. An outgoing boat shows us the way, and all is clear: we only need to follow the red and green buoys. The first boat shows the way and the entire fleet engages the narrow winding passage at the foot of the dam. 6 boats moored, and time to check the catch : 14 + 3 + 1 + 3 mackerel and 1 garfish to accompany the champagne offered by François as an aperitif; how can we refuse?

Sunday and it’s Easter: With the ringing of the church bells we receive the little Easter salute of the harbour seal of Bonne Anse under the flag at the harbour entrance in front of a motionless heron who mocks us with a masterful jab of its beak: a beautiful, simple and effective fishing lesson . Also fruitful, is the Easter egg hunt on the decks of the boats! After lunch on board, we are sent for afternoon interlude of fishing on foot: clams, mussels, oysters, etc. A standing mud bath is assured, and some have almost lost their boots. More seafood at the restaurant, and an orgy of mussels: marinières, curry...

Easter Monday (also): starting at 9:30 am , exit from Bonne Anse on the rising tide by 5 yachts in single file: Ca Le Fait helmed by Florence, Coeur Grenadine by Cathy, Folie Douce by Cecile, Moby Dick by Isabelle, and finally West Wind by Christine :ONLY girls! Sails are hoisted as soon as we leave the buoyed channel, driven by the current of the flowing tide, tacking fitfully in the fresh and changeable north wind ; some are fishing again and this time quite successfully. Jedak will help us at the mooring, anxious to tell us everything. BUT... Incident at sea!: Ca Le Fait beached! Somehow the boat managed to hit a sandbank off the beach at Royan. Jedak arrives to tow them safely into port. After below water inspection under the bow: where is the propeller ? Gone! As comforting consolation, Grand apéro ( rum punch) on the moorings followed by picnic on the boats.

Siestas and walks around Royan according to mood are the order of the day. Around 3 p.m., Ca Le Fait is towed by Jedak, towards Port Bloc where it will be repaired at the dry dock. Luckily, the wind is favourable. The others depart at 5pm, little current - good tail wind. Quiet sailing following the Charentais coast by Saint Georges and Meschers as far as Talmont then crossing Cap Sud at the level of Port de By. We skirt the edge of the channel - having regard to the passage of cargo ships. Coeur Grenadine tries a large asymmetric spinnaker, spi for Brame Häme, or sails in scissors form for the uninitiated.. Insidiously the wind drops, so the sails come down in favour of engines. The boats arrive at the Port of Pauillac at nightfall where there was a distinct lack of harbour lights. They manage to avoid the barges and unlit buoys. Christine doesn't recognize the moorings. But, phew, at 10pm, everyone is back safely without significant incident.

What a superb Easter weekend. When do we start again?