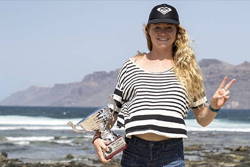 In February 2016, began the European Final of "Rip Curl Grom Search" at the well known straights of Ponta Pretain in Cape Verde. 18 european athletes representing France, Spain, Portugal, the U.K., Italy, and Marroco, - 10 boys and 8 girls - will take part in this competition to Qualify for the world final at Hawaii in May 2016. The Rip Curl Grom Search is a world-wide series of events specially arrainged for young surfers, under 18, to become recognised and accepted in world class surfing and to enrich their surfing experience in general. Juliette Brice, a 17 year-old from La Canau, is already European junior female champion, and therefore directly qualifies to represent France for the world final - Well done Juliette!

So, from the 3rd to the6th of May 2016,Juliette Brice was the only girl representing Europe for the final in Hawaii. She will be confronting the challenge at the Ala Moana Bowl in Honolulu, with the rest of the world-wide young female champions, to try for the trophy. Juliette, together with her male colleague Mathis Crozon, are hoping to take the trophy, which shall be a "springboard" to professional surfing

Allez Juliette ! all the Medoc is behind you - good luck!