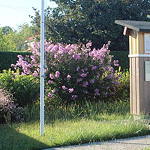 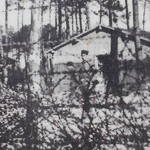 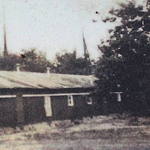 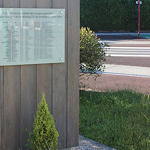 Yesterday I was walking my dog in a part of the village that I had never been to before. And there …. I noticed, 50 metres away, and near to a roundabout that I frequently pass in the car, a stele that I had never noticed. Of course I went to have a look at it and I learnt something of which I was completely unaware: there were prisoner of war camps in France in WWII. They were called “Frontstalag”.

Here, in 1940, in the suburb of Germignan, there were living quarters for people who worked in the Explosives Factory in the neighbouring commune of St. Médard en Jalles. At the end of that year the German military authorities converted it to a prisoner of war camp. This was Frontstalag 221.

In his racial frenzy Hitler didn’t want to pollute the soil of Germany with French prisoners who were of African origin. After a long and harassing march 60,000 of them were interned in this camp.

In 1945 a typhus epidemic caused 495 deaths in this camp. After the Liberation, the camp passed into the hands of French military authorities and became Depot 182, where Italian and German soldiers were held. The last prisoners left the camp in 1946.

Frontstalag 221 thus disappeared from the local, collective memory before benefitting from recent recognition. In fact this stele was inaugurated by the municipality on 26th August 2017; it had been constructed by local volunteers. The block of concrete on which it is mounted served as a support under the corner of a hut. The wooden strips represent the pine planks of which the walls had been made. The light coloured band is typical of the huts of Germignan, as is the roof in a bituminous roofing felt. On the stele a plaque commemorates the surnames, forenames, age of death and country of origin of these soldiers. May they rest in peace.

The first Frontstalag in the Gironde was at Souge, also near Bordeaux.