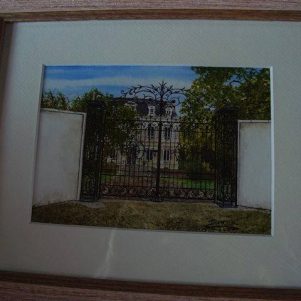 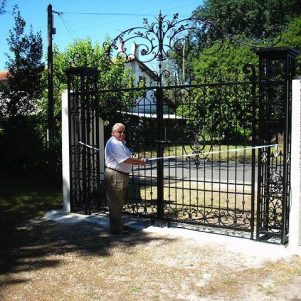 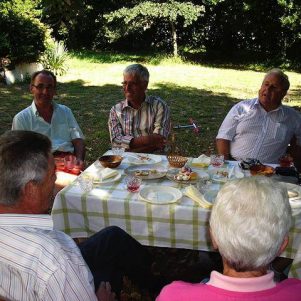 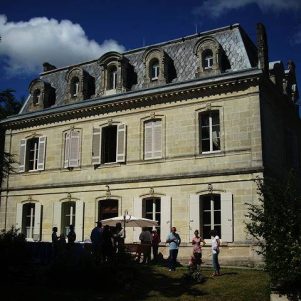 Having spent many months searching for pillars and gates both in France and the UK we finally found both in the SW of England in 2009. Traditional French gates were found in a reclamation yard in Wells, Somerset having previously been transported over the channel to the UK. Deciding to bring the gates and pillars back home to France we set about six months of repair and repainting to bring them back to their original condition.

The one addition was the overhead metal up-stand, which again was found in Wells and was part of a factory gate in China. A fitting link to our daughter who was adopted from China.

Having prepared the gates the next challenge was to secure a large substantial trailer to transport them. Having purchased a suitable trailer, we transported them in 2010 A very happy summer was spent installing them. The hard work was rewarded with an opening ceremony attended by friends from St Vivien, Bordeaux, Hourtin and Soulac including former owners Dominique Piel and Roger Dillemann. With the formal ribbons cut by Roger the portals were formally opened followed by ‘afternoon tea’ and toasted by Medoc wine!

Our yearly list of works now includes repainting and maintaining the gates. We would like to thank everyone who has stopped and praised the gates and hope that in a small way they have added to and enhanced the heritage of such a grand and special building.