The art of living in the Médoc – I am committed ! 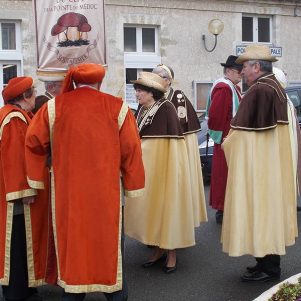 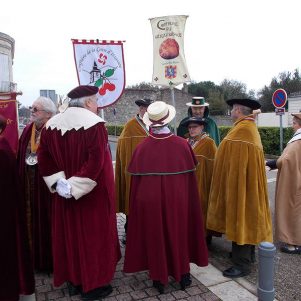 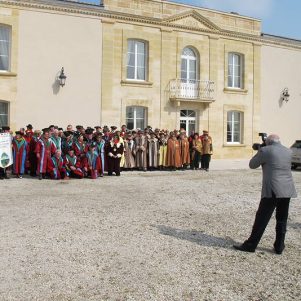 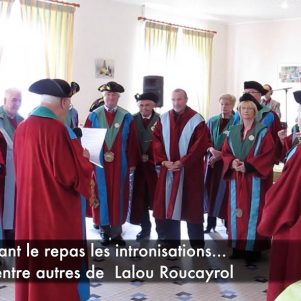 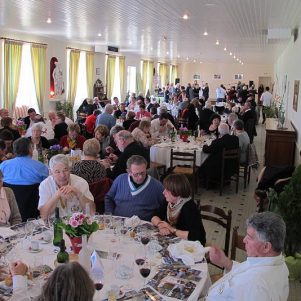 The art of living in the Médoc – even if you are not a great lover of brotherhoods you can’t avoid this slogan if you live in the Médoc. So I couldn’t refuse the invitation, first given in 2011, to be initiated into the Médulien Order, in the company of Gérald Tron and Marie-Claude Lafragette, the former owner of Château Loudenne. It was going to take several more years before being accepted into a Chapter, Chapter 22, in March 2015.

Ambassadors from the “Confréries” in several regions of France gathered together in Lesparre to take part in the event. It all began with a typically Médocain breakfast including, among other things, “grenier médocain” and Médoc wine. After a speech from the mayor of Lesparre we walked in procession to the church for mass. All in our finery. Our fetish for carrots, mushrooms, garlic, head of veal or “Espelette” pepper only referred to our costumes, but essentially was a reflection of the great “joie de vivre” of the brothers. The list of participants read like a fantasy menu. In his sermon the priest extolled this way of living so that the mass itself was also a pleasure.

After a visit to the cellars of UNIMEDOC and a wine tasting, we proceeded to the main event: the initiation ceremony at Château Haut Barail in Bégadan. The ritual is one where the initiates swear an oath on the Statutes of the Order. This time there were, among the initiates, the famous yachtsman Lalou Roucayrol who, like all the others, pronounced the “I am committed” to become a member of the Médulien Order. A grand meal with dancing was the culmination of this moment of shared pleasure. In all, a magnificent occasion which confirmed our commitment to (bonds with) the region.