Marriage of beer and wine 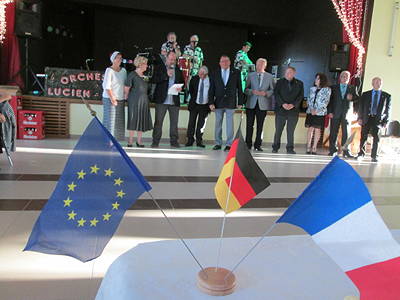 If it’s the case that one doesn’t take beer to Munich, then instead one could indeed brings it to St Seurin de Cadourne instead, where, to reward the joint committee of the participating communes on their 30th birthday for the creation of the original committee in 1985, the authorities of Bevern* commune (Lower Saxony,Germany), were able to assemple at the village hall of St Seurin on one Sunday evening of the year 2015; their arms full with cases of German beer.

These Bevernais all are placed with inhabitants of the twinned communes. They will finish a 6 days tour with a very full itinerary, from the Medoc to Paris. They will have visited Chateaux that include Casteja and Montrose… as well as the principal sites of the médocain history.

After the exchange of gifts, the Mayor of Bevern thanked the mayors present for the 5 twinned communes (Cissac, Saint Estèphe, Vertheuil, Saint Germain d’ Esteuil, & Saint Seurin de Cadourne. We listened to the thoughts of our medocain hosts for the first hour, who signed the “Twinning Treaty”. Mr. Stock pointed out the importance of this twinning, the connection between our common German and French women, which developed over the years to become staunch, with a deep friendship which continues between our two people, and in spite of our different languages gives an example to future generations. He finished his speech by pronouncing in French “sharp friendship between the inhabitants of our communes” and in German “Es lebe Frankreich”!

After copious aperitifs and ‘lubrication’, it was the folk music group of St. German d’Esteuil which animated the beginning of evening. The orchestra of Lucien Morin encouraged Franco-German couples to dance late into the night. One was left happy while promising oneself to repeat the experience in… Bevern!

NB/*Bevern is a commune of 3,946 inhabitants, and corresponds with some like-minded souls across its five twinned towns and villages; one of the reasons why this ‘twinning’ was signed in 1984.