Old Soulac and the sand-free bunker, accompanied by quiches and salads 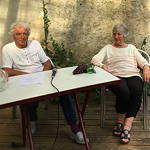 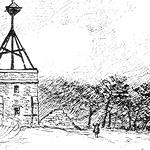 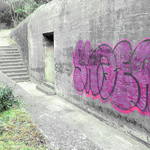 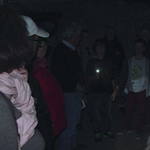 Despite the threat of a storm (the event was planned for the open air), more than 40 interested Europeans, mainly French and German, came together in the hope of being enraptured by 83 year old Jean-Paul Lescorce.

And it worked! The enchanting garden of the Maison Artemis was full of people of all ages. Florence, the owner, had placed tables an appropriate distance apart; Christian from Médoc-actif ensured the microphone was working; Jean-Paul sat ready behind a table to share with us a part of his life and his passion: the history of old Soulac, of the basilica buried in sand, the project of Soulac railway station. But most of all he explained, with myriad details, the construction of 350 bunkers on the Atlantic coast of the Médoc, the megalomaniac scale of their equipment, and what became of them later. Everyone was overwhelmed by his talk.

At Soulac, Jean-Paul, then aged 6, became the mascot of the soldiers of the German marine army, who very quickly adopted the young lad. He followed them almost everywhere and had access to secret places of the Wehrmacht, even the bunkers. The café of Jean-Paul’s parents had been requisitioned by the German soldiers and – as with many hotels and spacious private houses – was occupied by the military. So, the Lescorce family shared its living space with the soldiers of the marine army for several years. When Jean- Paul talks of this time he is almost affectionate in his evocation of the Germans, speaking of them as men who yearned for their families, their wives, their children and parents (but who were all the same at war!)

Jean-Paul knows everything about Soulac. No detail escapes him, whether it be about the war years in the Médoc, or the run of the tides and the erosion of the coast. His interest in his home town also led him to collect old postcards. He has finally decided to publish his knowledge and memories in book form, at the same time as the old postcards. These works, as well as his reporting, his knowledge, his humour and his very personal experiences quickly broke down barriers, as did his determination to make the bunkers accessible and open to visits. This involved clearing them, bucket by bucket, of the sand of the dunes which had covered them up again over the years. TV and the press in Germany, Belgium, and (it goes without saying) France, are interested in him. He represents an important and very personal part of the history of the Médoc which cannot be lived anywhere else.

After more than hour of his talk, including questions and answers, the evening became convivial and culinary. Florence supplied the tables with quiches, salads, wine and water; Jean-Paul signed copies of books, and those present talked of dramatic events from the past. Delicious food, a benevolent sky, lengthy conversation, the satisfaction of just being there, laughter and astonishment ... everything necessary for a successful evening!