The Tour de France comes to Médoc - a personal view 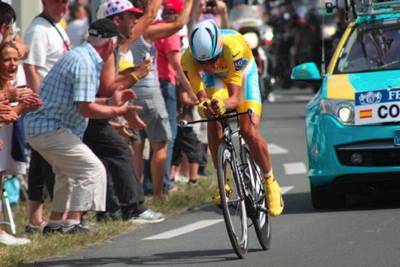 After years of watching the Tour de France a personal ambition of seeing a stage of this great race was realised this year as the final time trial came to the Medoc Region on the 24th July. We are privileged to be a member of the St Vivien community spending as much time as possible in France while the remaining time in Britain for work commitments. The opportunity to take a day off house renovations to see first hand the race was an opportunity not to be missed.

We shared the experience with a friend from Bordeaux who we met at Avensan for an enjoyable lunch just off the route at Castelnau de Medoc. A picnic spot we can certainly recommend. We then headed for Margaux where we were to see the tour pass by.

We were advised that Pauillac, the end of the stage, would be very busy so on local knowledge headed for Margaux where a grandstand view was available to see the riders pass by in touching distance. We certainly were not the first to the site with clearly many people having stayed in situ along the road. Small tents and motor homes had taken root for the duration of the event making a colourful backdrop to an already colourful event. French flags were of course flying but also a wide representation of other counties could be seen, Italian, Spanish, British and Irish were seen from our vantage point. 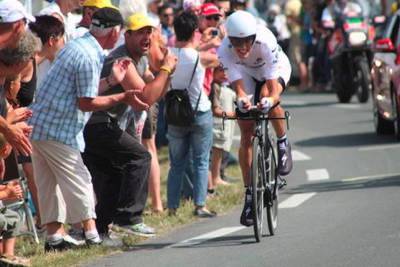 Having picked a bend in the road to see the event we could see in anticipation the riders as they powered their way towards us. With support vehicles for each rider and a police outrider for each cyclist the roads were constantly streaming with traffic. The support vehicles had the name of the rider displayed so it was easy to see the top riders. Even with a three minute time period between each rider there was little time to relax. In fact on one occasion two riders came at the same time with some confusion to the crowd.

The crowd appreciated the efforts of each rider by cheering and gave every encouragement particularly welcoming the intense effort on a very warm but windy day as they rode from Bordeaux to Pauillac a distance of 52 km at full speed. The distance was covered in about an hour with the first rider starting at 10.25am and the last rider started at 17.05pm

It was a particular pleasure to be watching a time trial as each rider could be seen rather than a fleeting mass of riders passing by as on other stages. We were delighted to see Lance Armstrong in his last race, a legion in his own life time. Andy Schleck from Luxembourg in second placed (or Sheak as our ten year daughter calls him after the movie!) and Alberto Contador from Spain the eventual winner of the tour were also highlights for us. All the riders made the course look easy with super human strength and determination particularly after three hard weeks cycling including massive mountain climbs.

The top riders were easy to spot as they were followed by helicopters covering their moves for TV. In England the Tour de France is a sporting highlight with live coverage of the event every day. Many British people follow the tour to explore the countryside of France and follow this up with visits to favourite areas. We are sure the tour will encourage many to come and experience the delights of the region from other countries. We were so impressed by the experience so have already decided to view one of the mountain stages next year. It was certainly an experience to be remembered for years to come.