The oysters and prawns of Philippe Lucet 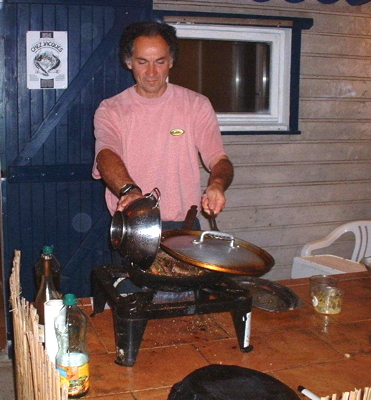 Several kilometres of gravel track from the Port of St. Vivien leads to Philippe Lucet’s restaurant “La Petite Canau”. Philippe has been here every evening for more than 20 years, in the prawn-selling season of July and August, doing his cooking, char-grilling the freshly-caught prawns on a shovel, and preparing the chips to go with them. It’s truly amazing to watch. Médoc oysters are also found here. Several years ago the ban on raising oysters in the Médoc was lifted – a ban which was justified at the time because of the high level of heavy metals in the Gironde.

Today the river is once again clean enough for the locals to continue the ancient tradition of raising oysters. However many things will need to be done to ensure that the region around the Gironde estuary remains a healthy environment for both wildlife and people. You can feel Philippe’s sense of commitment, as President of the Association “The Estuary for All”, an association which, with others, halted the project - classed as Seveso 2 – for building a terminal for natural gas tankers at Le Verdon. He tells us all about the aims and achievements of his Association:

“In the beginning the main aim was to prevent the North Médoc from becoming a zone of heavy industry, and all our ideas about development were concentrated on that. The elected representatives and responsible officials had to accept that the North Médoc should most definitely remain a tourist region, but also preserve its natural environment. This was not so obvious then. For 3 years we fought energetically to ensure that these issues were quite clear. That done we remain committed to the Médoc region development plan. This is the major success we have had since we began.

We subsequently supported the development of a natural marine park in the Gironde estuary. We worked intensively on that for several years and the creation of that park began 3 years ago. As a result of our activity in all areas the Prefect appointed us as an advisory member of the committee governing the park. Today the Association has a seat on its council. This is extremely important because the council negociates and discusses all the projects concerning the park, and its agreement is essential for the establishment of the park.”

In order to ensure a balance between ecology and economy in an environment as sensitive as that of the Gironde estuary, the Association “The Estuary for All” ,needs people like Philippe Lucet and as many members as possible. If you would like to support this initiative by becoming a member you will find an application form here.