At this year's cultural meeting in the German Consulate General (Bordeaux) we announced the repetition of the radio series "Die deutsche Viertelstunde", which was to be broadcast on 9 dates in July and August. The association Aqui Fm had meanwhile agreed to our terms:
- the shipments are completely pre-produced by us,
- There is an advertising campaign in the big holiday centers
- In parallel to the broadcast, broadcasts are offered on our website
We were able to set up an editorial group so that we could distribute the 9 broadcasts among several people. In May, production started. We had a sympathetic partner in Aurélie Duphil, she is employed by Aqui Fm and organized the advertising measures (posters and flyers).

But it was still a very complex project.

Here are the results

Even today, 70 years after the end of the Second World War, the traces of a disastrous past cannot be overlooked on the beaches of the Médoc. People remember things differently: older people still know something about the war and its consequences, the younger ones tend took to their future. Older people, if they have witnessed the war as children, are just as valuable witnesses to the recent history of Médoc as the few documents that have been found so far. These documents include the letters of a German prisoner of war, who worked as a mine clearer. Karin Scherf, the editor of a German TV station, found the letters after the death of her father. He had written to his mother from his prisoner of war camp in Médoc. They serve as the basis for a lecture, which Karin Scherf accompanies with a small exhibition. In it she shows memorabilia which she received after the publication of her book "Spurensuche am Atlantik: Letters from French Prisoners of War" which were written during this period.
Article in Médoc actif
Musical Evenings at Château Chantelys
10.8. and 6.10.2016

Artists from the Euronat can join in with this concert series. The concerts are free of charge, usually take place on a weekday at 21h and are organized by the artists together with the Château Chantelys and Médoc actif ( who make theprogram or artistic arrangements, organize advertising, provision of a small buffet and wine tasting). The IFE / AIDE participates with some financial support for each concert. Up to two concerts per year can take place. The artists can ask the concert visitors for a contribution. A first concert took place on August 10, 2016 (harp concert with Oona Böken), a second on October 6, 2016 (piano music of the Baroque with Peter Sommer).

Xavier, a member of the local radio station AQUI FM, has a German girlfriend, so he came up with the idea of giving her compatriots a few minutes moment in their mother tongue, which is useful as it shows a nice attitude - they have not forgotten those who have chosen this peninsula as home. Christian was there, and so "the German quarter hour" was born ...
Continue reading
5 European picnic
22.5.2016

We were all children. The Goethe-Institut had already offered to show the exhibition Nous étions tous des enfants / We were all children in the Médoc a few years ago. The city of Lesparre took on the project and organized it with us in the CALM (Center d'animations Lesparre Médoc). Photographs were taken by French photographer Janine Gatheron of French and German people depicting childhood scenes during the Second World War. In cooperation with the Heimatmuseum Vertheuil (Alain Tandille) and a private collection of Hartmut Starke on the subject of games and toys in World War II, has completed the exhibition.

Here are some pictures of the exhibition ...

und ein and a press article..
Presentation of the booklet “German in Bordeaux and Southwest”
21.3.2016 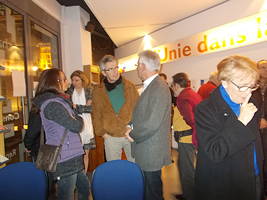 "The idea behind this book came from the European regional partnership between the Aquitaine region and the state of Hesse, which has existed for 25 years and is still little known to the public. The publisher Cross-Culture Publishing dedicated the 3rd edition of its title France, published in May 2015, to this jubilee and, in our opinion, required the German counterpart in Bordeaux and Aquitaine, although the territory of Aquitaine is currently in a state of flux due to French territorial reform. This is more oriented towards the business of the German Consulate General Bordeaux and is called German in Bordeaux and the Southwest.The new Southwest, of course, includes Aquitaine, but it is now starting in the region around La Rochelle and extends in the south beyond Toulouse to Montpellier ... " (from the editorial review)
Rezension
Our facebook page

There has been a facebook account since 2015, which we set up because a lot of French people communicate via facebook. But we did not really get going until 2017. We publish information and hints about interesting events and projects there and have presented numerous small videos that we did not want to post on our youtube channel because they are too special. Our site is well integrated in the regional flow of communication and we are now promoting our own activities

In recent years, the number of people using smartphones to access websites in general, and of course Médoc actif, has increased significantly. To help with this, our website has undergone major changes in recent months. The newsletter has also improved, offering 4-language access so that you can read a post on the desired language. At the same time the site was changed to html-5, which improves both the technical handling and multi-browser access. A big chunk of work, which - hopefully - was worth it!