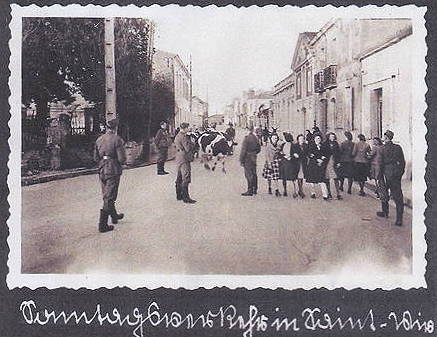 My brother, who lives in the Charente-Maritime, belongs to a postcard collecting society. One of his friends found this postcard of Saint-Vivien dating from 1943. There are very few of them which is why he gave it to my brother who scanned it and sent it to me. I asked a 96 year old resident of Saint-Vivien, who is one of the “anciens combattants” ( war veterans ), and he said he didn’t recognize anyone, but there is Monsieur Egreteau with his cows. He had a meadow beside La Coulisse. He came and went every morning and evening, and lived near the pharmacy. His cowshed was where the municipal depot is.

The photo shows the main street and that’s where I played. There was a baker, the house of Madame Capdeville and the tobacconist. The German soldiers arrived in 1941. They lived with my parents at the Château Gauvin and occupied the whole of the north front, both the ground and first floors. They stayed there till 1944. My father, who had 7 children and was already elderly, was not called up. So he stayed here and was made responsible for providing food for the Germans. In addition, the Germans who were here marched the French to the Atlantic coast 2 days a week, and the French were forced to work on the construction of the blockhouses, and on cleaning the road.

But the Germans were fine as I recall. I was 5 years old and they gave me sweets. One day one of them became so angry that he smashed the cistern of the WC. He left for Russia the next day !

Here we called them “territorials” these 50 year old Germans ….. they were there because they were told to be. There was no conflict with the local population. They spoke a little bit of French, especially those who lived in the house. They blended in.