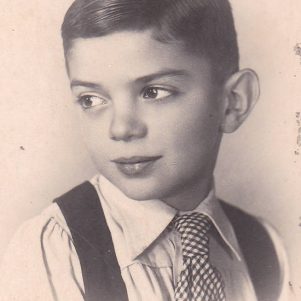 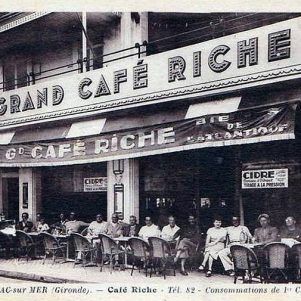 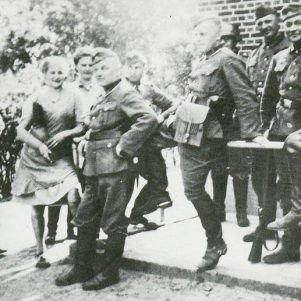 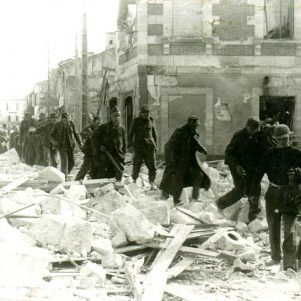 On June 20, 1939 German troops occupied the two Charentes, on June 26 they crossed the estuary by the ferry “ Le Cordouan”. They arrived on June 26 at Le Verdon and the 27th in Soulac. But the Germans were already in Bordeaux occupying the important and strategic maritime port. So, there was a column coming from Bordeaux and another who arrived by ferry. There were 4,000 troops in all. They requisitioned all the houses in the Northern Médoc initially as lodgings for the troops and they had two priorities: to neutralize the entrance to the estuary with floating mines and to construct the Atlantic wall on the coast of the Medoc.

At the beginning of the war I was 3 years old and I lived in Soulac on the pedestrianised street at the Grand Cafe Riche; today it is the famous ice cream shop , the Roi des Cones! I was 3 years old, and my father was walking in the pedestrianised street when a number of motorcycles with sidecars and helmeted soldiers turned up, rifles slung over their shoulders. They asked my father where they could find "gasoline" and he points them in the direction of a garage. Later on, the soldiers are settled comfortably in all the houses in Soulac. Here too were lodged the STO personnel (obligatory work service) which included my father, whose services were also demanded.

My father and my mother were owners of the Grand Cafe Riche and all the officers of the German Navy arrived in this café and virtually have commandeered it - for use as a pleasant distraction for the Kriegsmarine officers. In the evening, there was a German musician who came with his accordion. In this cafe I met all these officers. George Schillinger, the Commander of all the North Medoc coastal batteries, was French on his mother’s side and German on his fathers’ (who was originally from the Black Forest) and had been educated in Mulhouse in France. He was clearly a francophile.

On 10 February 1944, while I was playing on my balcony, a number of German musicians arrived, and in their midst some of the officers I knew already, and among them an officer I had never seen. Apparently it was Field Marshal Rommel! I noticed that he was wearing a white scarf around his neck and he had a stick of wood in his hand. I said to myself " what is that stick in his hand for?" Later, browsing through some documents, I recognized Rommel and his Field Marshal baton!

They walked up the Rue de la Plage and I watched them from my balcony. The band preceded the armed soldiers, the officers followed and at the back more armed soldiers closed the parade. They went to the Hotel de la Plage, which is now the Balizie restaurant for an aperitif. That night there was a fireworks display.

Field Marshal Rommel, who visited all the military installations on the coast of North Médoc on 10 February 1944, declared that all the batteries were operational. He spent a night at the villa Faust at Soulac belonging to Baron Thierry, a friend of the Commander Georg Schillinger with whom he had been educated at Mulhouse.

After the end of the war I lived in Saint Vivien in my grandfather’s house which was between the cemetery and the water tower. The town centre had been 80% destroyed. If you look at the statue of the Virgin, she has a severed hand and there are still vestiges of the destruction. Behind my grandfathers’ house there were bomb craters and I played among them on my bike. I was a choirboy at Saint Vivien, and before going to Church, we kids played amongst the foundations of the Town Hall.