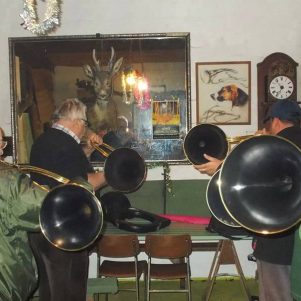 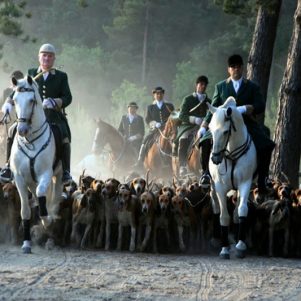 Hunting with hounds to horse, known as the chasse à courre in France ,can be for red and roe deer as well as wild boar and hare, which can be also either be on horseback or on foot. After that there is the small game hunting such as rabbit and other game as well as the fox which is pretty well exclusively done on foot..

Here we are in a room, which is called the Rembuché, it is here that the Rally Aquitaine-Gironde (http://www.rallye-aquitaine-gironde.com) has met for the past for 35 years on the morning of the hunt. Soon we will hunt, in the evening there is the post-hunt dinner (après-chasse).

Attached to the meet of huntsmen and women is the Rembuché of Hourtin-Médoc which is a group of trumpeters which I founded in 2002. The years have passed, and as with all French associations there are highs and lows. The group all but broke up not very long ago; people went as some did not agree with a host of issues; and then last year – very recently – the Rembuché of Hourtin was down to four. But in September 2014 there was a phone call, a young man who asked me if I could give a refresher course in the hunting horn. He brought his wife along and a friend, so now we are seven. We rehearse every Monday evening here; I can provide an instrument training course as well as music theory etc. So everyone can learn to play this instrument from the baroque era..

Each and every movement of the animal is described with particular notes. In hunting there are 51 different pieces to tell the rider what is happening in the hunting field. The trumpeting group takes up a V formation on the sound of the horn (first horn ,sounding horn, second horn, second sounding horn , bass- first horn, first radou, second radouci, softened horn - the list may go on.). If you look at the way the horns are disposed at a performance, the sound is directed towards the public, the trumpeters have their back to the public.

We are the only musicians who do this when playing in public. We offer hunting horn performances not only for hunting events, but also for others, such as country fairs involving hunting, shooting and fishing. Until last year this instrument was used almost exclusively to make music for the hunt but since last year the hunting horn has been classified as a musical instrument in its own right and will form part of the UNESCO cultural heritage classification ;it enables us to do extraordinary things with it apart from its use for the chasse à courre.