The black one with shovel-legs 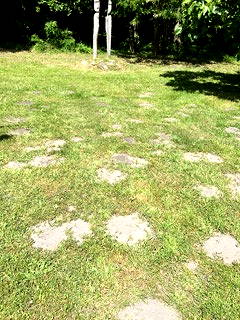 It is an underground plague for beautiful lawns. It is the enemy of all gardeners who believe that their grass should be perfect and beautiful. I am one of these.

Trying to entice it to go elsewhere, perhaps to a neighbour’s garden or nearby fields is pointless.

After its ‘visit’, our lawn was comparable with a warzone. I decided to launch a counter-attack. We were initially advised to try ultrasound treatment with apparatus inserted from above which promised to drive out the enemy. But very close to me - as by way of a show of bravado, a very fresh molehill emerged right beside me. Consequently my first attempt was lost.

So I then turned to my special weapon: carbide. I put it in their holes and added water to it; thereafter smoke was released which would have caused the toughest field vole to scarper. But just three days later, the mole re-appeared… again!

But we did not despair. According to a specialist, the most effective weapon would be Butyric acid, well-known when we were pupils when it was called “the stinking ball “. However it transpired that the only species which had to escape was….us! As the mole is considered a protected species (in Germany), the use of traps is prohibited. We decided on a win-win solution. As the mole is naturally well-adapted to the odours and the use of traps is excluded.

We told the specialist “thank you” and to remove the mole traps. We then used the molehill material to even-up and flatten our ground.