→ Leaving the Médoc for a journey

During May we decided to celebrate a birthday in Ile de Re, suffice to say neither of us will see thirty five again. Friends advised us to call in at Rochefort and visit the Royal Rope Works (Royal Corduinary) and also see the building of the replica 18 century frigate “Hermione” advice we are so pleased to have taken.

Rochefort town, situated twenty minutes south from La Rochelle, was developed in the 18 century by the French, specifically as a safe place to construct France’s war fleet. The natural harbour created between Ile de Re and Ile d’ Oleron and the accessibility of the river Charente were ideal not only for the building of the ships but also as a major safe destination for damaged ships to visit for repair re-arming and to be supplied with all the equipment necessary for ocean going warships. A massive arsenal was developed on this site. 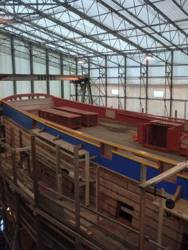 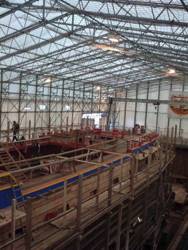 The Hermione is being constructed in a covered dry dock, with external viewing and information points at each deck level. Construction started about ten years ago, the number of craftsmen varies but a regular team of six work on the oak construction, boosted by blacksmiths, sail makers, painters etc. as necessary.

The oak, for the construction of the Hermione, is being sought from all regions of France. Specific shaped trees are required to match the templates to be used to create the keel and bows. During the summer, groups of actors, dressed in 18 century costume, help with information and bring the ship to life, especially for younger visitors. The Hermione’s major claim to fame arose because the ship carried the Marquis of La Fayette with a group of soldiers to America at a time when France was looking to conquer new lands. The construction work to date is exceptional; paint and gold leaf have now been applied to the stern of the vessel. We will certainly visit the Hermione again the whole experience was fascinating.