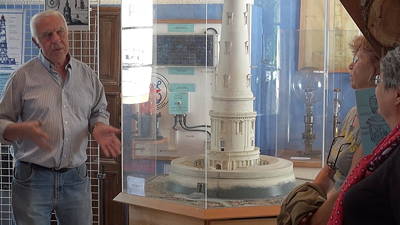 In the past the post of lighthouse keeper often used to pass from father to son. But in my case I was really drawn to the sea because I was from the Vendée, from the village of St. Gilles Croix de Vie, which was a big fishing port. I had an uncle and 3 cousins who were fishermen and when I was little I often went out on my uncle’s boat with him ….. I was very sea-sick, yet I went back again the next day ….. because it was a job that appealed to me. But at that time I had absolutely no thoughts of lighthouses. And when my parents moved to Le Verdon, I looked at Cordouan, as did many candidates then, without even thinking that one day I’d become its lighthouse keeper.

So I worked as an engine driver in a company, then I got married: my father-in-law worked for the Lighthouse & Beacons Service and one day he said to me: “Right, if you want it, there’s a job vacant, you can apply for it ….. sometimes, in life, a bird in the hand is better than two in a bush …… “ Fine, I already had a small job in this company, as it was, and there were not many candidates.

In the Lighthouse & Beacons Service you generally start at the bottom with menial tasks. For me this meant cleaning buoys, painting, making blocks, in a word everything that could be called manual work. Later on you could specialise either in lighthouses or in the buoy and beacon boat.

In my case I chose lighthouses. I passed the entrance exam in 1975 and then did a year’s course at Brest, training as an electrical mechanic. Just then there were no vacancies in our region so I had to go up north, almost to Belgium, to the Port of Calais. The Northerners are very nice, but the weather ….. I worked in Calais for 3 years and I can tell you ….. its perishing ! Really, for me, there is only the South West …. And up there I looked after Calais lighthouse, Cap Gris Nez lighthouse, but when a post turned up here at Le Verdon I came back to my roots.