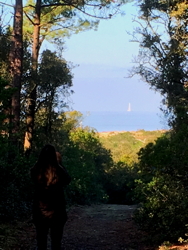 The Cordouan lighthouse is at the forefront of our personal memories of the Médoc. When we used to go back and forth for holidays in the Médoc, and didn’t yet know the region well, the lighthouse marked our passage from the continent to « Paradise ». The view from the ferry over the waters of the Gironde estuary became an essential part of each of our journeys from Germany to the Médoc; an unmissable sight.

Now that we live here we see the lighthouse less but other “emblems” have come to the fore. Our commitment to saving it led us to join the association concerned with its conservation. Focus has moved away from the need to have an association of volunteers occupied with its upkeep to its promotion and the maintaining of keepers throughout the whole year - thanks to the State’s intention to seek its classification as a UNESCO world cultural heritage site. Our commitment to this association, which today has more than 400 members from all over the world, dates from the time when we were still struggling to know which of the state or semi- state organisations was going to take over responsibility for the lighthouse. UNESCO was not yet in the picture. For us it seemed vital to become involved in conserving the lighthouse by whatever means possible, so we joined the «Safeguard » Association.

We suggested creating a suitable website to ensure its promotion among members further afield, and after a short time, Christian was elected as a committee member. Even if, at the beginning, he understood little of these meetings, there were always areas to which he could contribute his own knowledge and ideas. For example we first set up a translation at the exhibition of the Cordouan Museum. Then we made contact with the Hamburg Lighthouse Association whose members were invited to Le Verdon and to Cordouan lighthouse. This association then invited the President of the local association, Jean-Marie Calbet, on a reciprocal visit. 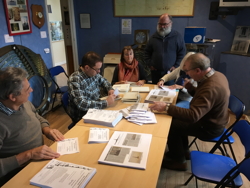 Later, we made many videos on the theme of cultural events around Cordouan lighthouse, and published articles on our Médoc Actif website, not forgetting to offer practical help in moving tables and chairs for festivities around the Grave lighthouse, or working on the transport vessel that had been acquired in the meantime.

After the state became involved through the intermediary of SMIDDEST (mixed syndicate for the sustainable development of the estuary) and DRAC (regional directorate of cultural affairs) the future of Cordouan lighthouse seemed assured. The main priority of the association is now the Grave museum and lighthouse. As Cordouan lighthouse is now open to visitors from April to October it seems appropriate to install a video projection about it in the museum. The next challenge will be preparing for school visits to the lighthouse.

The current restoration works on Cordouan lighthouse will soon be finished. New, younger members are actively involved in the work of the CA and, after almost 10 years, we can pass on the baton without a backwards glance.